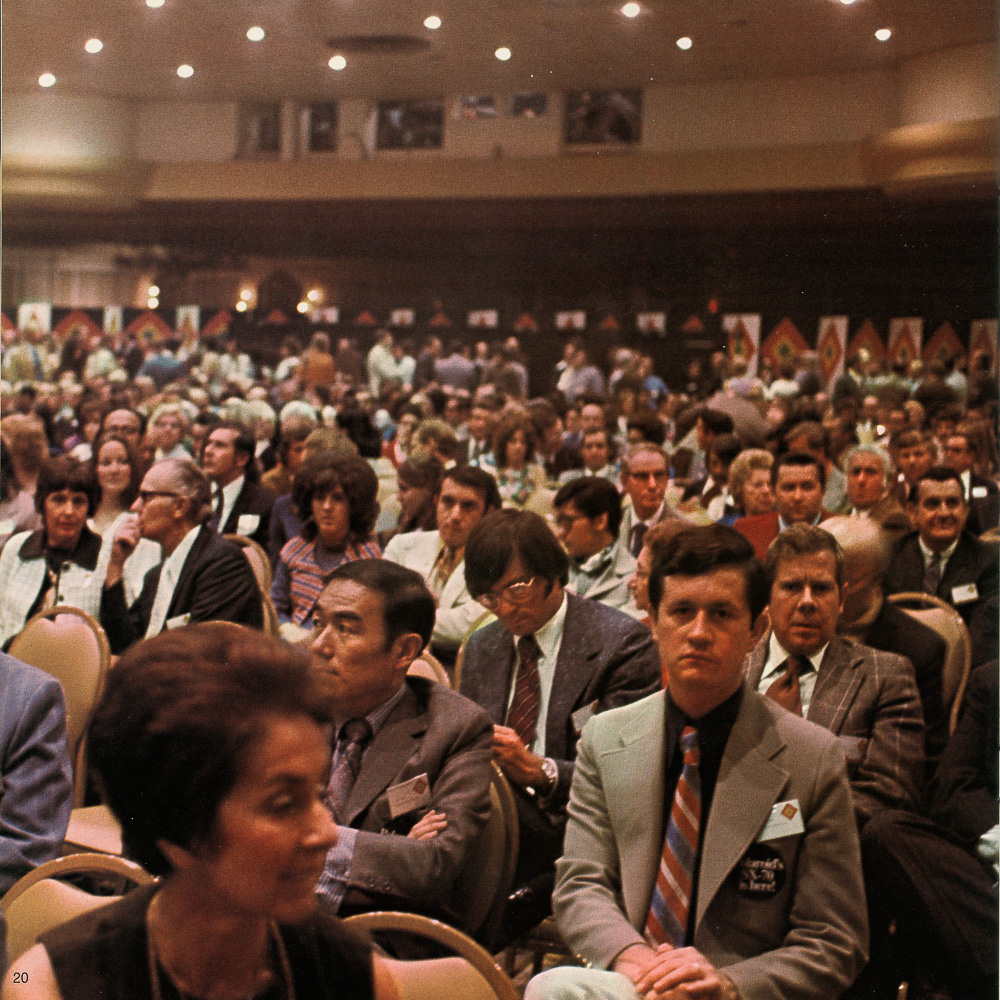 There are many books and articles comparing the late Steve Jobs with Dr. Land, drawing parallelisms. And I understand.

It is hard now for us to imagine Dr. Land as a showman, but he was. He not only was a talented scientist and entrepreneur, always insisting in the impossible. One of those persons that act as a catalyst for people around him to accomplish amazing things. He also disregarded market resarch.

But the thing that amazes me the most about what he called absolute one-step photography is the way he envisions such a camera as an everyday tool, as an aid to memory, and, what he is doing there is giving us a glympse of the future. Modern smartphone photography is just that in many ways. It rhymes in such an armonious way with what Dr. Land had envisioned, the pocket-size, the intended use, the parallels with a phone…

He knew what he wanted, and he knew how to get it. An he had the stage he deserved in the Polaroid Corporation shareholder’s meeting every year.

I had read all the stories about fleeting an airplane to bring it full of a special kind of tulip from Holland, just because they were of the right color. To showcase the camera and the film.

But ever since I read this article by Prof. Peter Buse, for me there was one that was legendary: the shareholder’s meeting held on March 22nd 1973.

Compare the “high quality printed” rose vs the original print rose on the report: 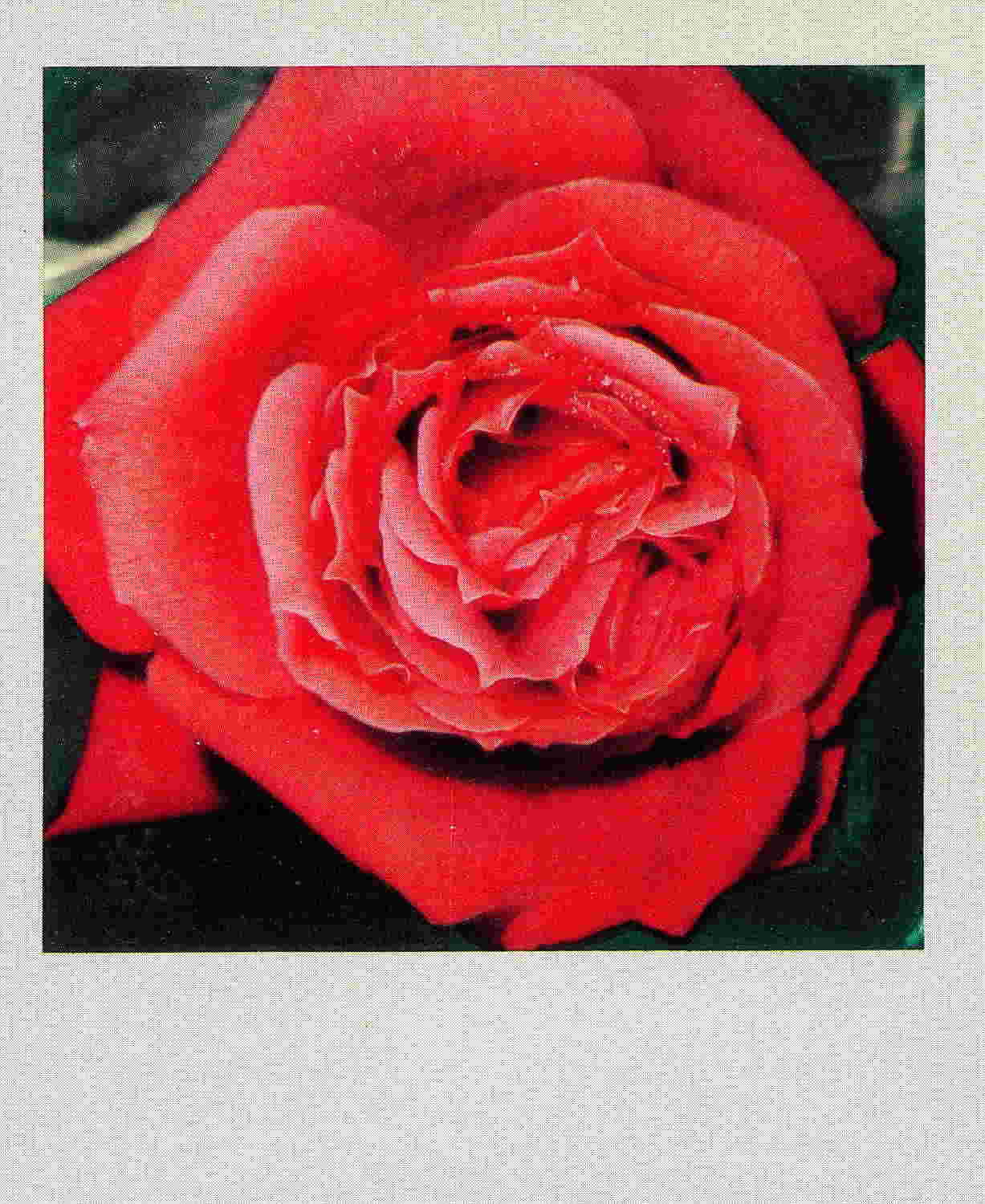 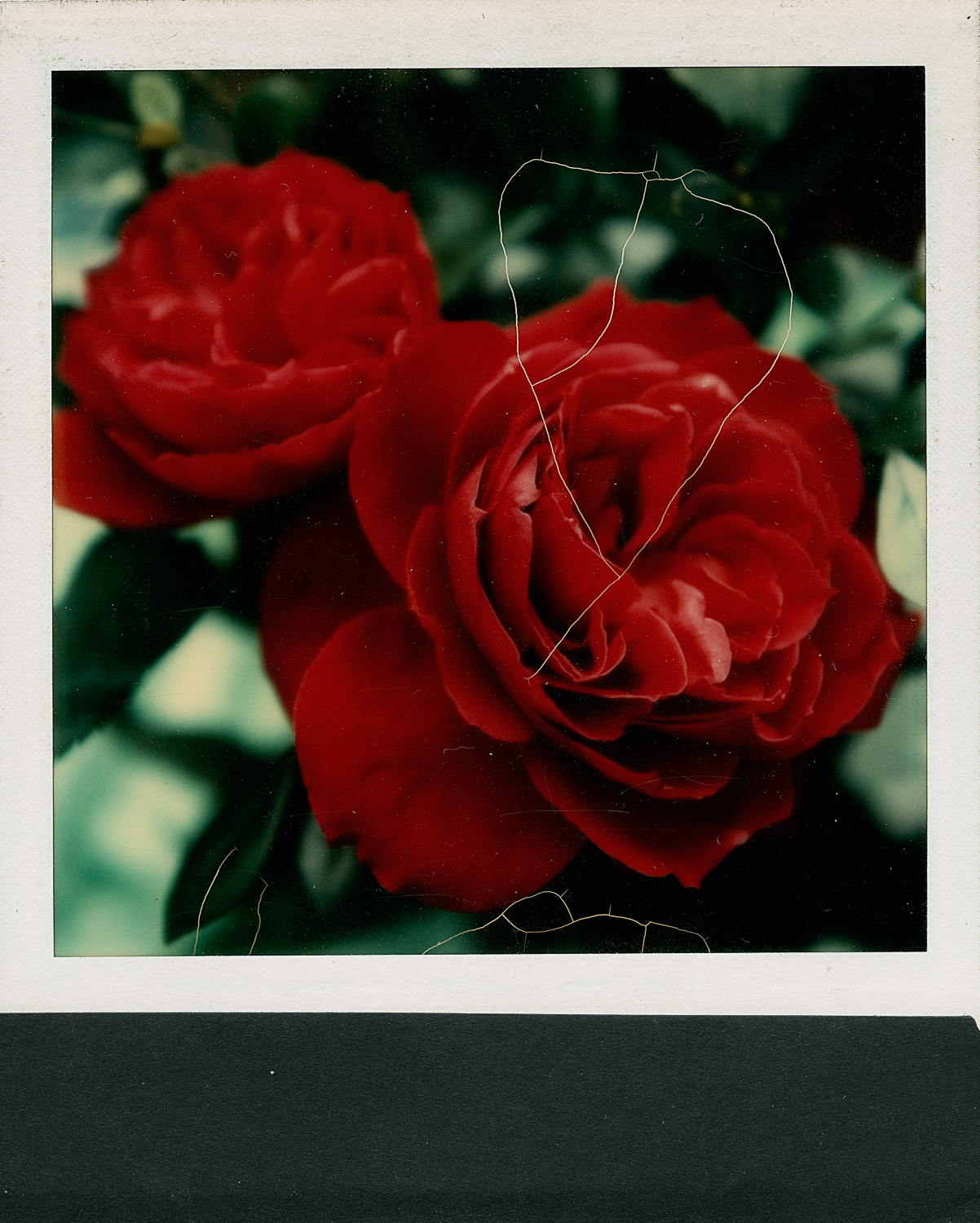 So I did what I always do: search online trying to find something, maybe a good scan, maybe a bad scan.

And there was NOTHING only this request by Christopher Bonanos, the author of Instant: The story of Polaroid

But I am getting ahead of myself, let me write a few quotes from A Triumph of Genius: Edwin Land, Polaroid, and the Kodak Patent War, Although this book is about the patent war, it has a lot of information about Polaroid. Ronald K. Fierstein is very meticulous, he talks about the unveiling of Aladdin (SX70):

Act One of Land’s presentation was a tease. The performance occurred on April 27, 1971, when he surprised the Polaroid faithful and the assembled media at the company’s shareholders meeting with an unannounced and unofficial glimpse of the future. The event was staged in a massive, as yet unoccupied, factory Polaroid had built in the Boston suburb of Norwood to manufacture its new and mysterious camera.

It is now known that the camera he teased that year was just a block of wood, a mock-up. There are many references of such a mockup, in “THE BIRTH OF THE SX-70” RECOLECTIONS BY ONE DESIGN ENGINEER a typed paper signed by “WPLANE” and dated 9/18/80 he starts:

In the beginning there was a black block of wood. Dr. Land had in his left hand a black, rectangular block of wood. It was about 7 inches long, about 4 inches wide and about l inch in thickness. He unbuttoned his suit jacket and deftly slipped the wooden block into his right inside jacket pocket and then re-buttoned the coat. The block disappeared into-the jacket not to be seen until removed from its place of hiding to spring into action as the SX~TO camera. That small, smooth, black block of wood was the actual physical space representation of Dr. Landls greatest dream.

Fierstein even says For years, this led to the inside joke around the camera design team that the most important person in the whole project was Land’s tailor.

But following on his recollection of the unveiling of the camera he goes on saying:

For the second act of his two-year drama, Land orchestrated a double-barreled back-to-back scenario. First, he decided to debut his new revelatory product to 3,000 Polaroid enthusiasts at the April 25, 1972, Polaroid shareholders meeting.

The 1972 shareholders meeting was held in another “cavernous” Polaroid warehouse, this time in the Boston suburb of Needham, Massachusetts. Land and his assistants had rehearsed this performance extensively over the previous weekend, and many of the props, including the film units that were to be used, were only completed at the last moment. After braving a massive traffic jam coming into the facility, and then passing through “elaborate” security measures that required them to leave their cameras at the door, the Polaroid faithful gathered with great expectation. Land was impatient for the normal business portion of the meeting to conclude so that he could start his demonstration.

After Land’s demonstration, the attendees were able to wander among twelve octagonal platforms set up in the warehouse to watch Polaroid employees use the camera in different applications. Twelve thousand tulips had been flown in from Holland and arranged around the platforms, each housing its own scene including love ducks splashing in a pond, some children playing at a party, and a painter working at her easel.

To trumpet the retail launch of his “dream” system, Land once again orchestrated a big and dramatic event, gathering 1,200 camera dealers at the Fontainebleau Hotel in the Miami Beach on October 26, 1972. Searchlights crossed the Miami evening sky while an airplane trailed an SX-70 banner along the beach.

I have been fortunate enough to have stayed in the Fontainebleau Hotel a long time ago, and can only imagine the spectacle. Of course then came 1973 Shareholder’s meeting.

Shareholder’s meeting were a big deal not only for the company but for the attendees. It is difficult to find pictures of those ocasions, but I have found a PDF, “Stories from behind the curtain at Polaroid’s Shareholders Meetings” by John and Mary McCann. I tried to contact the McCanns to get a permit to use those pictures, but never got a reply. I highly recommend you look at it. By the way, John McCann was reponsible of the 20x24 camera. Enough said. I highly recommend that document it has very nice not often seen pictures.

So the Shareholders meeting that year was going to be the first time shareholders could play with the SX70. Previous demostrations where highly controlled, to avoid spies from Kodak. Mr Fierstein says that in a technical demostration, at the end all pictures were punched and secured. But Kodak spies took the punch holes to analyse. It was war.

So you can imagine my awe, when I was able to purchase one complete original report. Yes, in mint condition and with the rose. 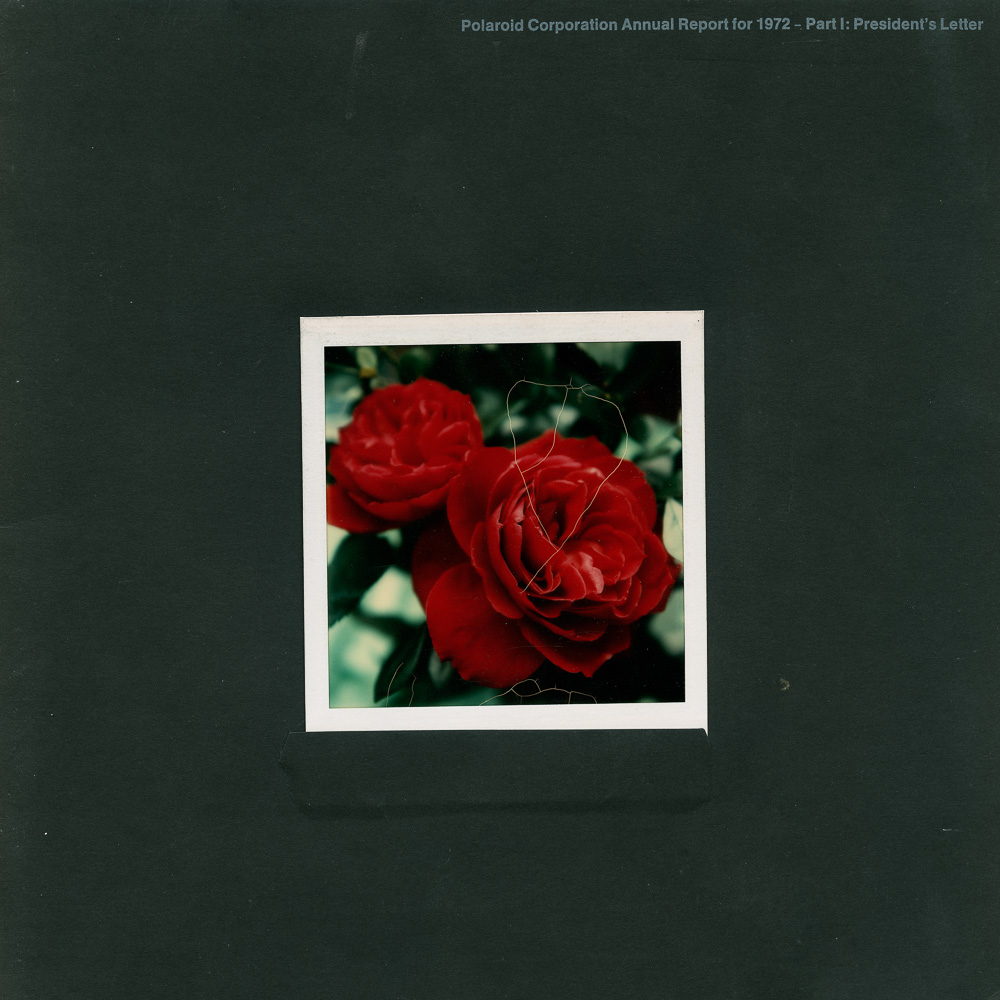 It amazes me, the quality of the picture, how well colours have held. I feel fortunate to have it in my possesion. And I have scanned at high resolution.

It consists in two parts. First is President’s Letter, it is a letter by Dr. Land addressed to the shareholders. It simulates typewriting, and Land’s signature. This is the one with the rose. I assumed that the signature was not -could not be- original, but I was hoping it was made with Autopen unfortunately that is not the case as it is clearly printed.

Part two is the actual report. Beyond the -now- meaningless numbers, it amazes me the quality of the graphic design. It looks so modern, even today. 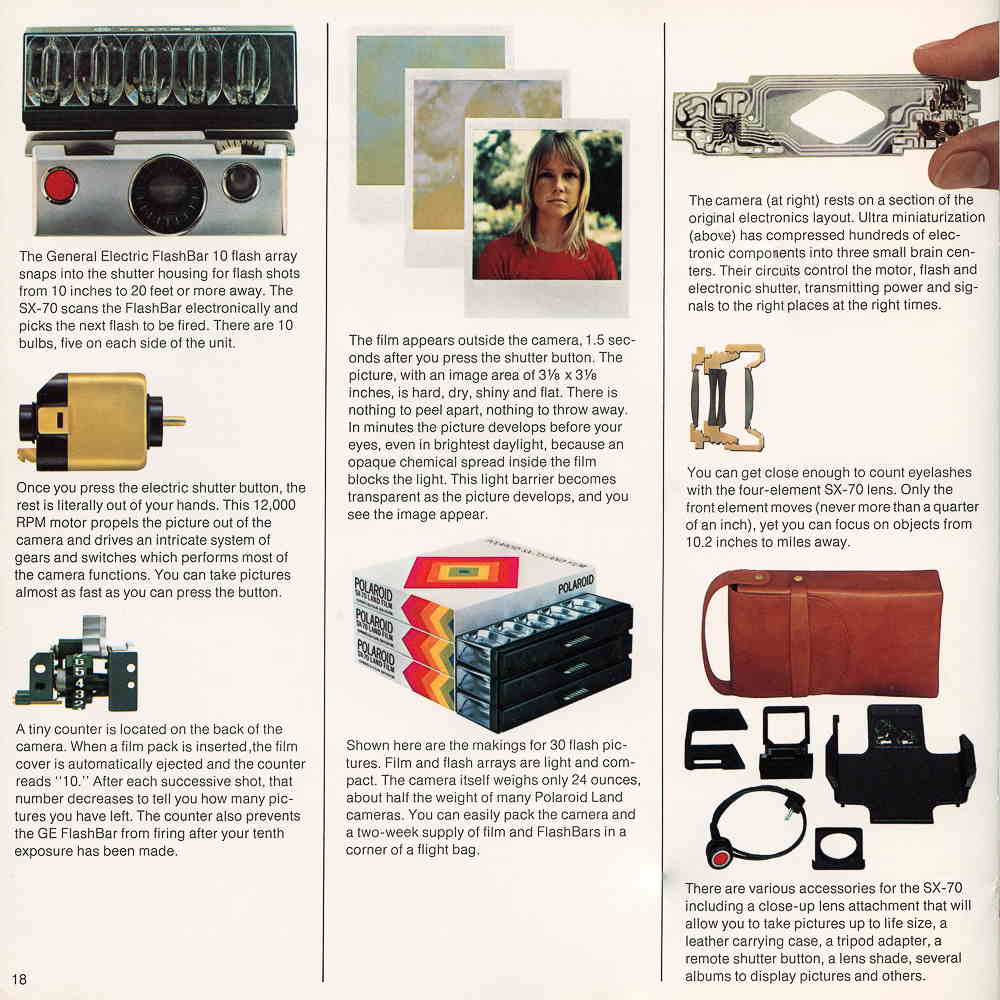 I just want to point out what for me is the obvious, and what SX70 meant for the company.

-At that time Kodak was no longer an asset-collaborator, many of the “parts” to the process that Kodak provided had to be manufactured in-house, to even higher precision.

-one of the crown archivements in the film side was “Aspirin” the opacifier that permited the camera to exist. BUT that came late when camera development was way ahead assuming such goal would be accomplished. Newer film does not even come close to that level of excellence.

-on the camera side, many many breakthroughs had to me made specially in optics by Dr. Baker and Dr. William Plummer Many times the problem was mass production.

I hope you enjoy the report as much as I did!