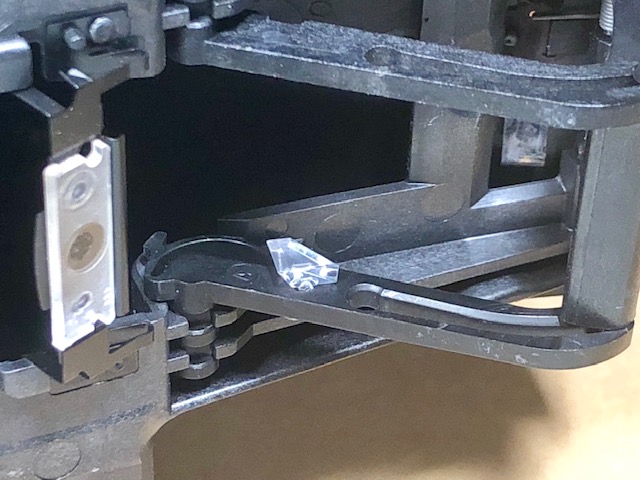 You might have seen some of my posts about the LED.

In the beginning the LED was more a part of the Arduino for me. It is very practical to check basic functionality of it with the “Blink” sketch (“sketch” is the name software running on the Arduino). And “Blink” is the equivalent to the “Hello World” and is a program that makes an LED blink.

But the LED on the main PCB was in the bottom (the back so to speak) and it could not be seen. Later I moved the LED to the front. But it was still hidden on the working camera so it was still utilitarian: not very practical (Do not confuse this LED with the one on the uDongle)

But if you have ever used a sonar camera you know that there is a little red light in the viewfinder that tells you when there isn’t enough light to take a picture. When I noticed that I was blown away. 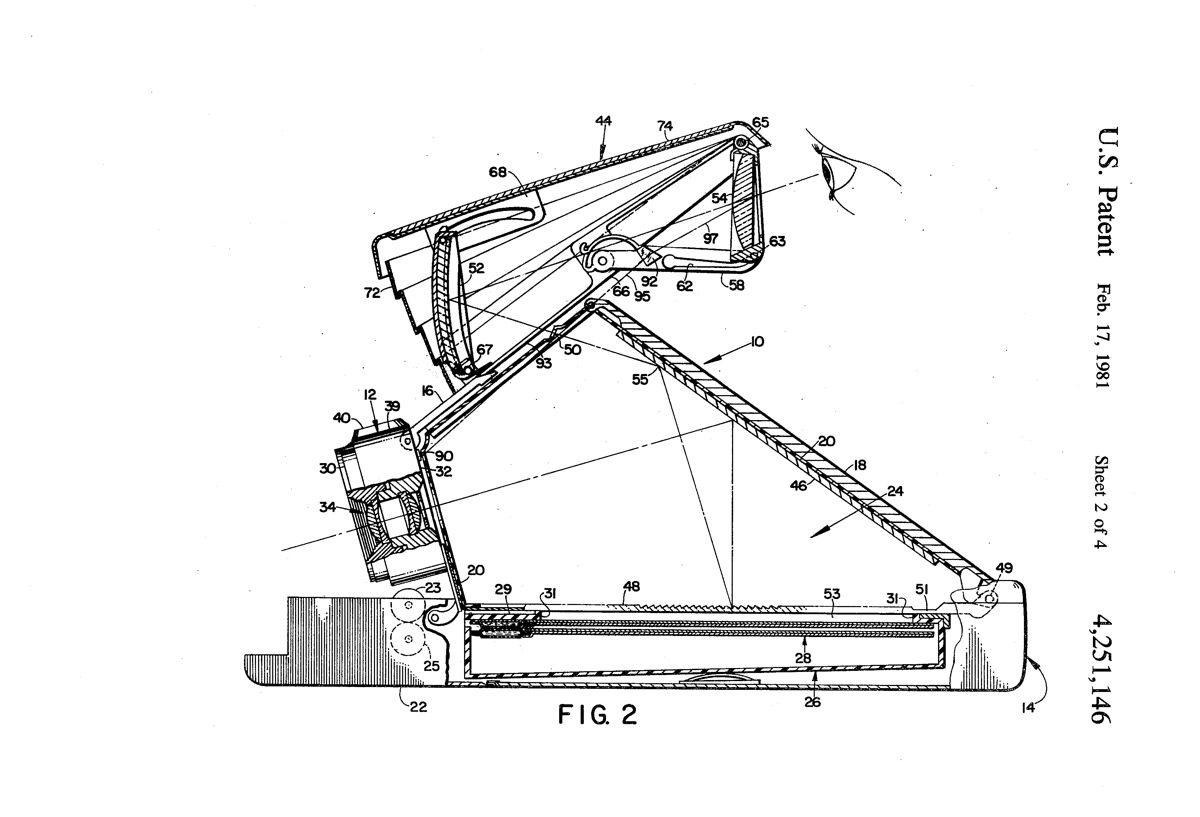 In this patent Dr. William Plummer describes the invention (used on Sonars, I don’t know any non-autofocus camera with this)

Since there is no line of sight from the LED placed on the PCB, it is in a different PCB and show behind the main PCB, it must be connected to the light sensor. 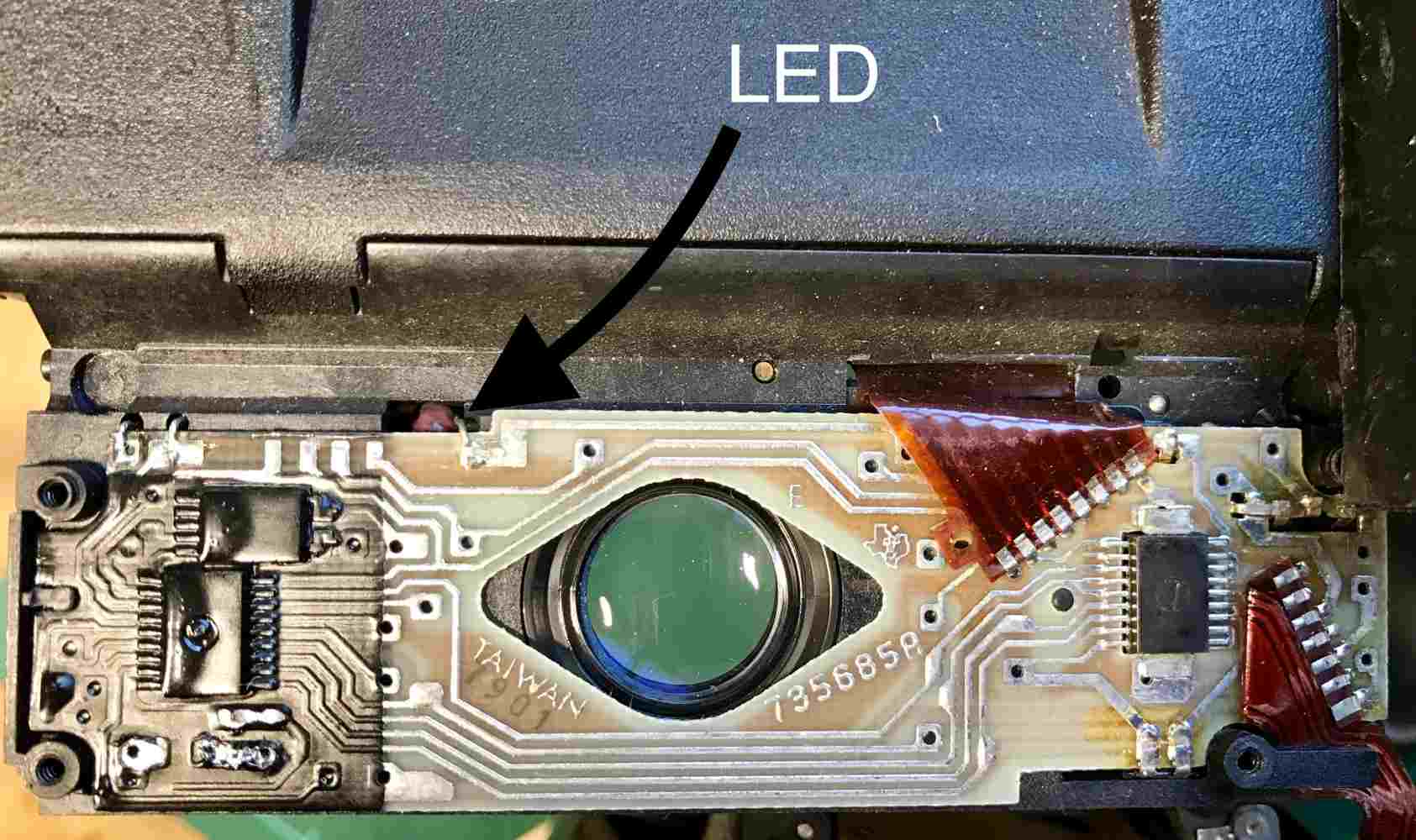 But there is no direct light path to the eye lens so they use a prismatic optical element It is just a piece of plastic, but it is a cheap and clever solution to the problem! 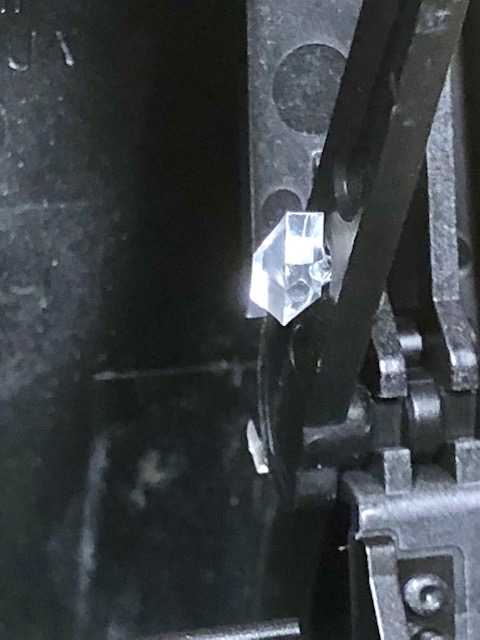 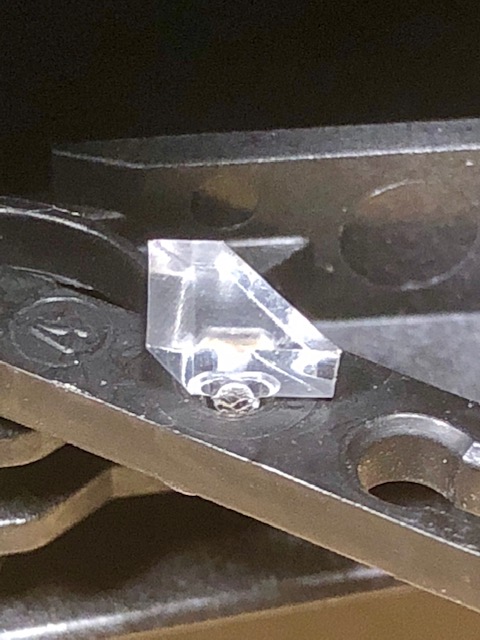 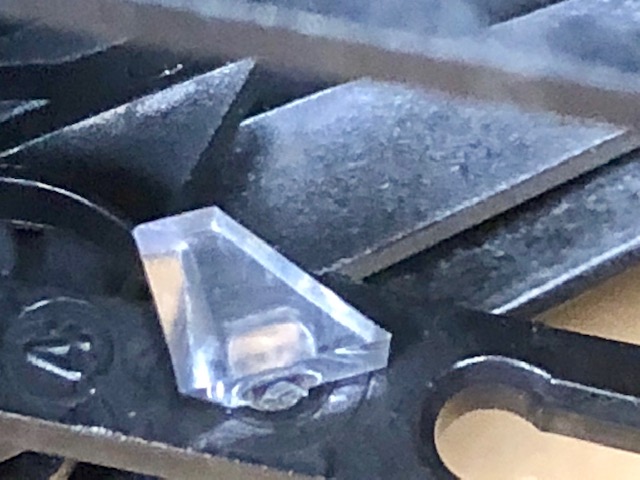 The path is sumarized in this ilustration from the patent: 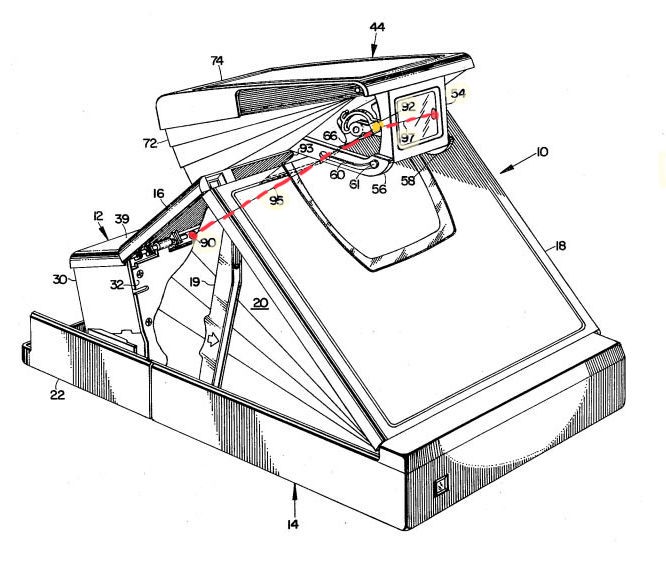 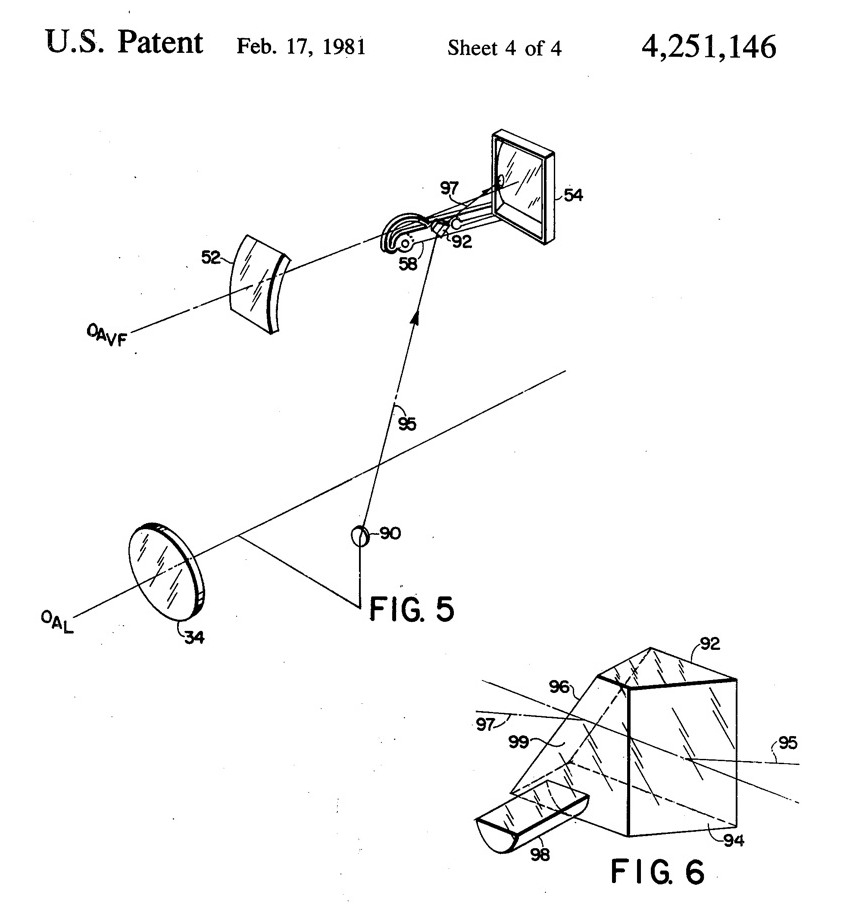 So it clicked one day in my brain: Why not use a similar location for the LED so it would (at least theoretically) to have an LED visible in the VF?

That could be accomplished by having a donor sonar camera VF mounted on a non-sonar camera, or perhaps 3D printing the part (it is like a prism) needed to accomplish this and retro-fitting it in a pre-sonar camera. 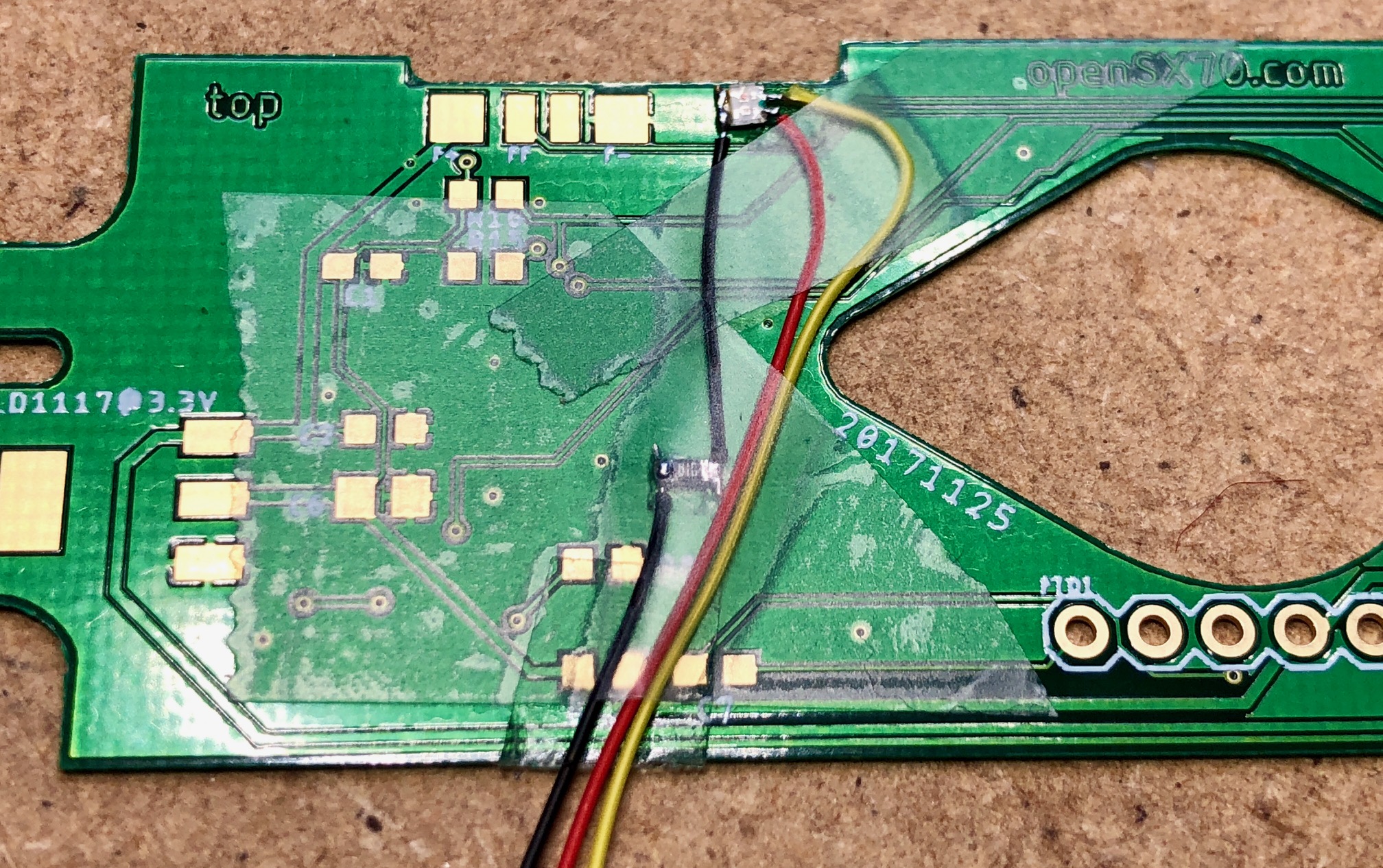 So I did a rather rough test and it seemed to work. Of course it won’t be really tested up until I receive the boards and do a true test. It has many probabilities of failure, first on the sonar the LED is in another pcb showing from behind, and perhaps the location is critical.

What I have done is a rough estimate of the location, and of course using an SMD very small bi-color component. 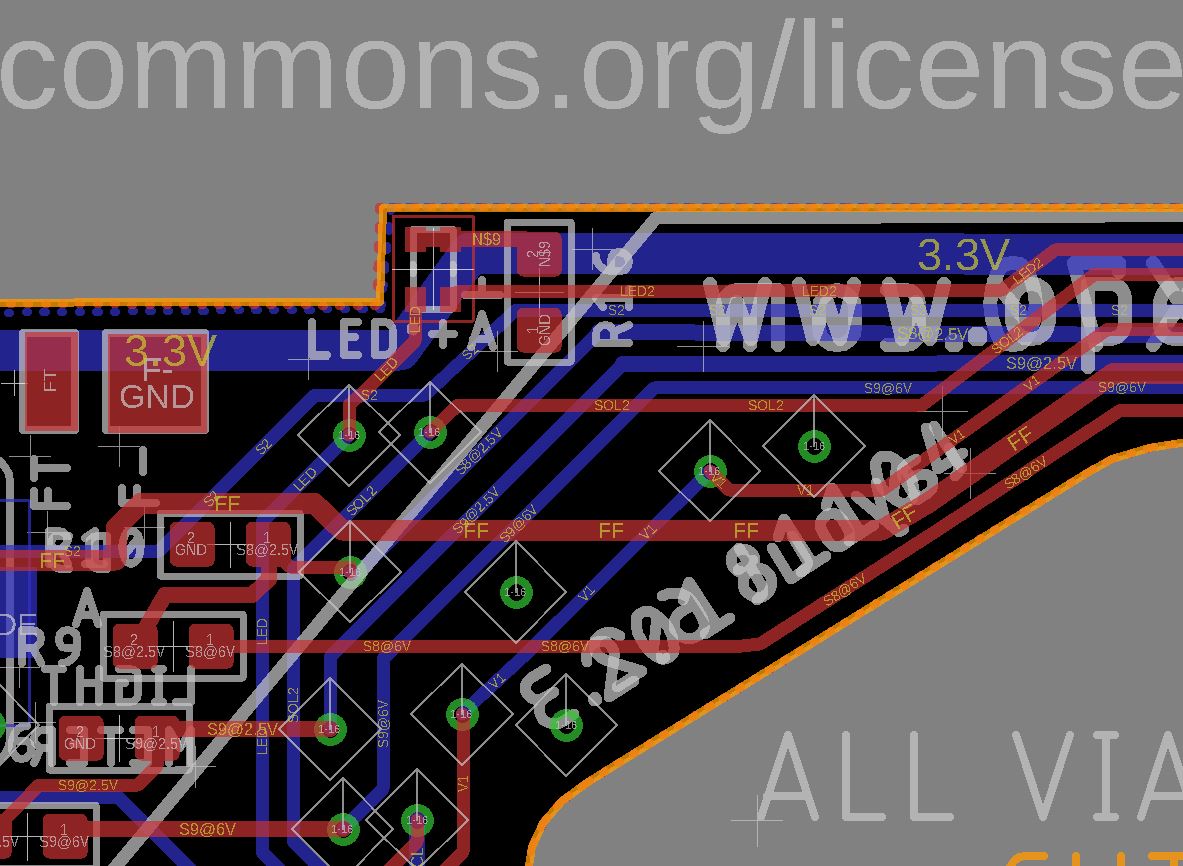 I thought that it could be used to relay all sort of information and not only low light situations.

So… is this essential to the openSX70 camera? absolutely not! You might think of it as an easter egg! Will it be possible to 3D print the prism? I truly have no idea. And the big question is will it work? I sincerely don’t know, but wish me luck! But IF it does work this really makes to the ultimate openSX70 camera!