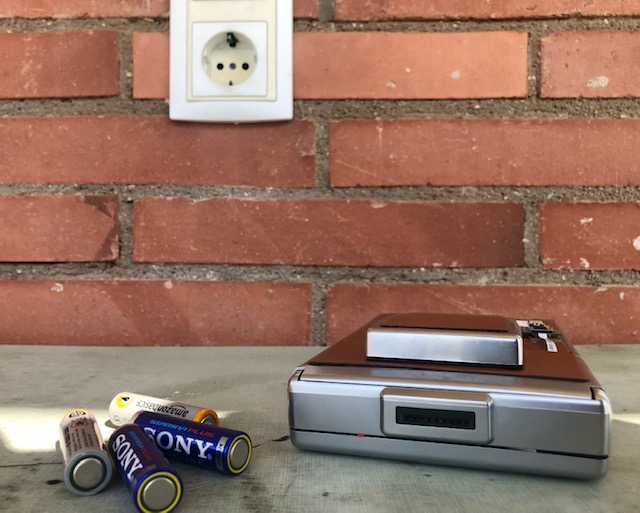 Are there reasons to use i-Type film in an SX70?

How do we go about it?

Polaroid film has been getting better and better, with its three basic variants, SX70 type with an approximate ISO of 160, type 600, with ISO 640, both with build in battery and finally i-type film, without battery. All new film units are significantly thicker than the original ones, and thus only 8 photos fit in a pack.

SX70 film is for the original SX70 and all foldable cameras up to the SLR680. Many people like earlier models, those cameras, simpler without flash or sonar are really compact and definitely fit Dr. Lands pocket. I myself prefer Alphas, with the focus aid, tripod mount, and I like them chrome with tan leather. 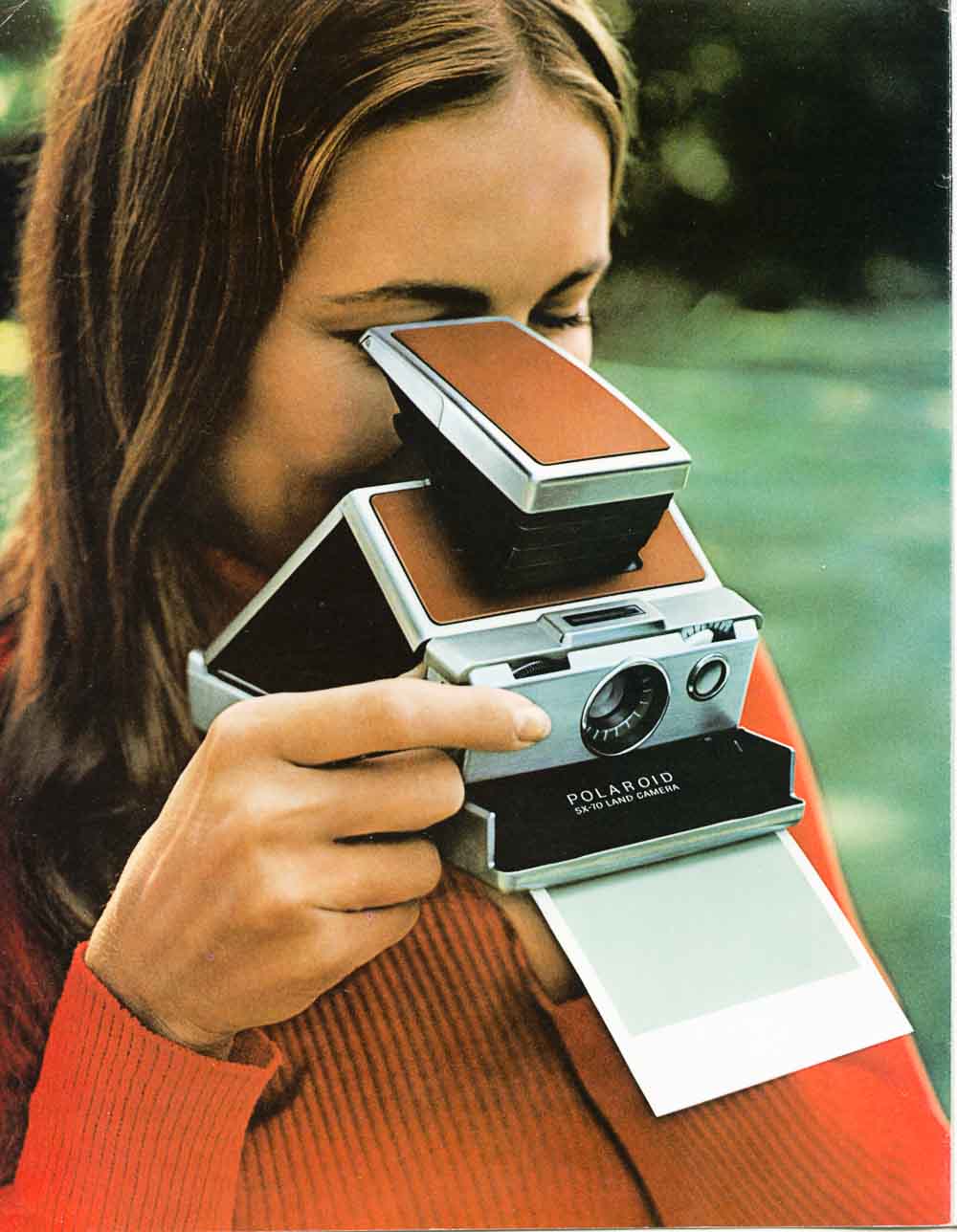 Many people will tell you that this film is so much better that its ISO 600 counterpart, and prefer to shoot with it, even if it needs more light. At first I thought that this was utter nonsense, but I am beginning to think that this is the case.

Not only foldables, but some box cameras also use this film. This film is the most austere, it normally comes in colour or black and white with the white frame, no fancy frames or special editions.

One can only assume that SX70-type ISO was too low for indoor shooting, thus needing flashbars, a powerful flash, for indoors. So, eventually Polaroid came up with a higher ISO instant film. This was for original box cameras, and SLR680 and SLR690, the latest foldable.

In my mind, and for a long time, there was no reason for shooting at ISO 160 if there was a possibility of shooting the higher ISO 600 film. And I still think this is the case in many situations, and for many reasons, mostly also because there are regularly special editions, with special frames, or duochromes like the the yellow duochrome edition with black frame

There is also the possibility to shoot this film in an unmodified SX70 by means of a ND filter, either on the lens (that affects the viewfinder image) or on top of the pack (has to be placed in darkness). Electronic modification is much more suitable, and can have a switch for selecting the film type.

Technically the fastest speed that the SX70 shutter can reach is about 1/178th of a second. Which isn’t much, but by means of the way the shutter works EV high as EV17 can be reached, of course at a much higher F-stop.

When Dr. Land set out to design the SX70, the ultimate instant photography format, one of his goals was to avoid the “batteries problem” for the user, so, when a new pack was inserted, new batteries were also in place. But that was by no means an easy endeavor in the late sixties. Initially subcontracted to Ray-o-Vac it had to finally be re-engineered in house.

It was a big accomplishment, and a big success.

But times change, and environmental concerns make the battery in every pack concept very unfriendly, with concerns about proper battery disposal.

So when the Impossible Project came up with the design of the I1 camera they skipped the battery altogether. Battery was now an environmentally friendly rechargeable battery (Unfortunately it was also a rather crappy battery).

This trend has followed, and there are a few “new” Polaroid box cameras.

That means that i-type film is here to stay. The opportunity was lost to make a 10 picture pack with the battery space, but the film is cheaper and the make some exclusive special editions.

Point is, there might be all sorts of reasons why you would want to use i-Type on your SX70.

PROS: have been outlined, but here they are, cheaper, special editions, environmentally friendly. CONS: still only 8 pictures, but above all, you need to ADD somehow an external battery, that will spoil the SX70 experience, adding a bulky lump.

Or do you??? Well there’s always the possibility of transferring the film to a regular used pack. Batteries on those, even used, last for many more than 8 pictures. Some people also strip the battery of a pack to the minimum, and stick it under the i-Type pack. 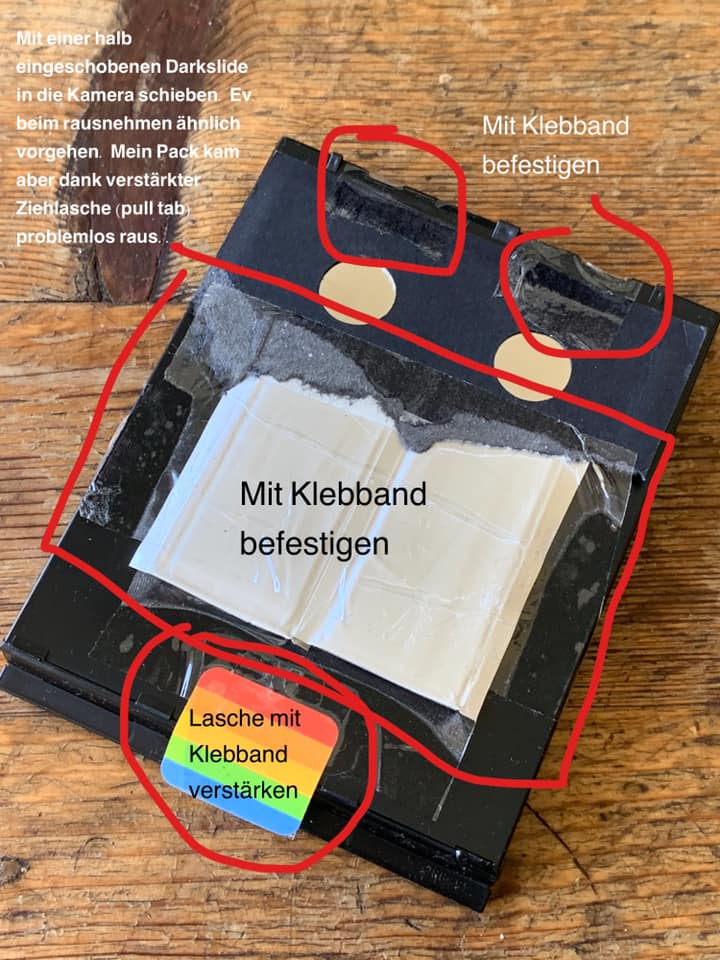 In this picture you can see how the pulling tab is reinforced, and the battery hold also with tape, sorry only found it in German, will try to replace it with mine.

Here is a video in Italian.

But of course what I am talking here is about accessories that allow to use external batteries. And there are a few, both DIY and commercial.

Hannes, AKA @optoflw has come up with this idea, 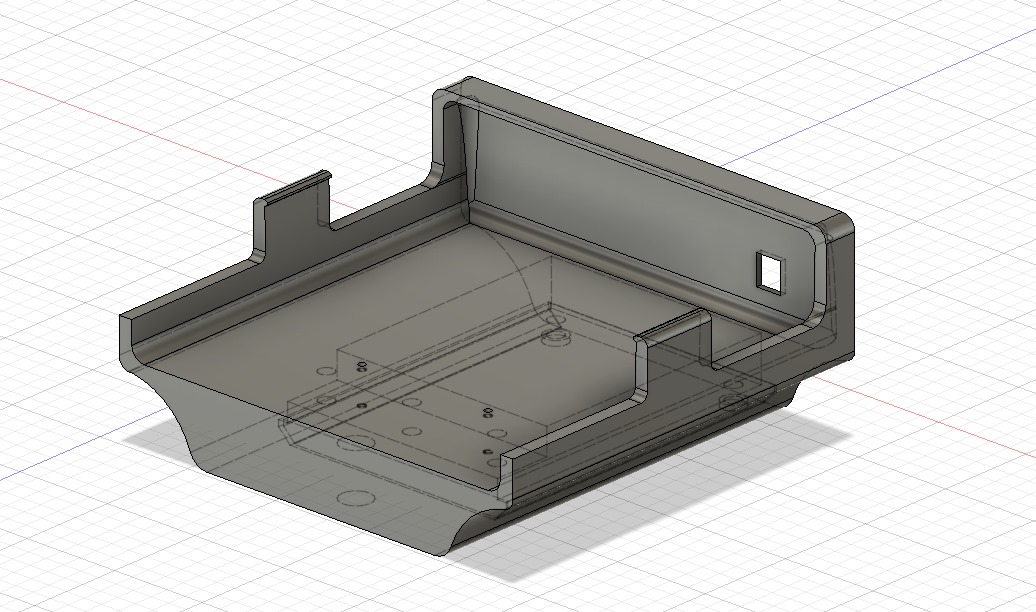 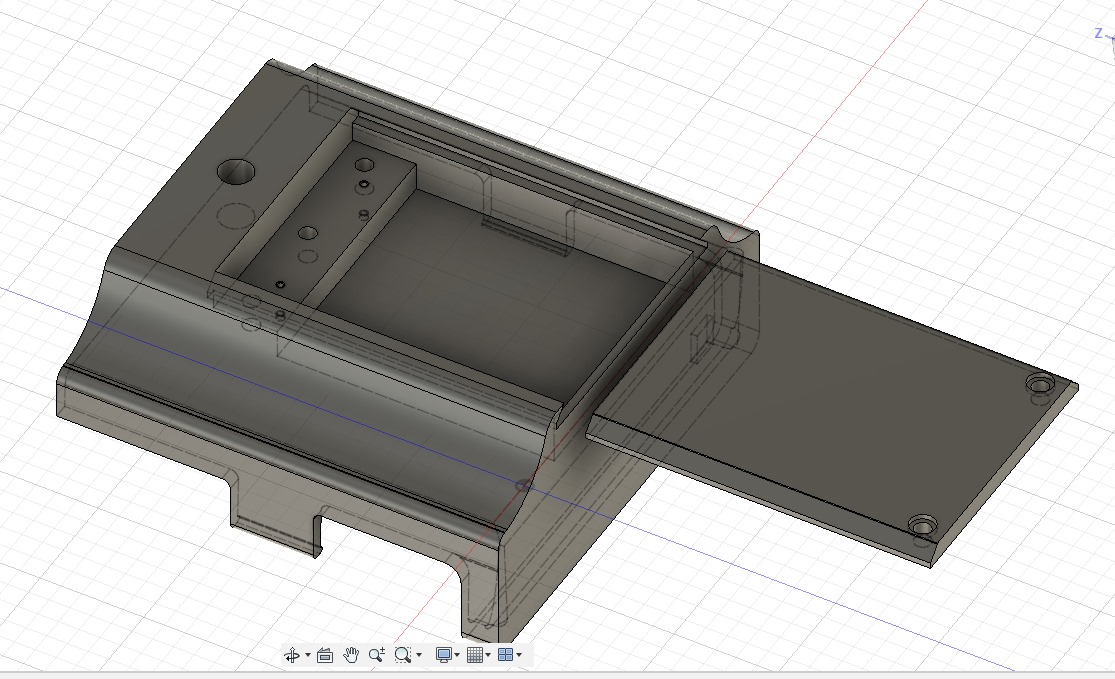 The idea, is always more or less the same, some sort of pogo-pins, spring loaded connectors, make contact to the test points under the camera. Of course you need to remove the skin and make the holes in the proper location.

This is similar to the design by the legendary Matt Widmann

PROS: snap on, user regular batteries, can use rechargeables, it is free. CONS: need to modify the skin, make some holes, connection to the test points might be fidgety?

Max AKA has this very interesting concept reusing the original batteries 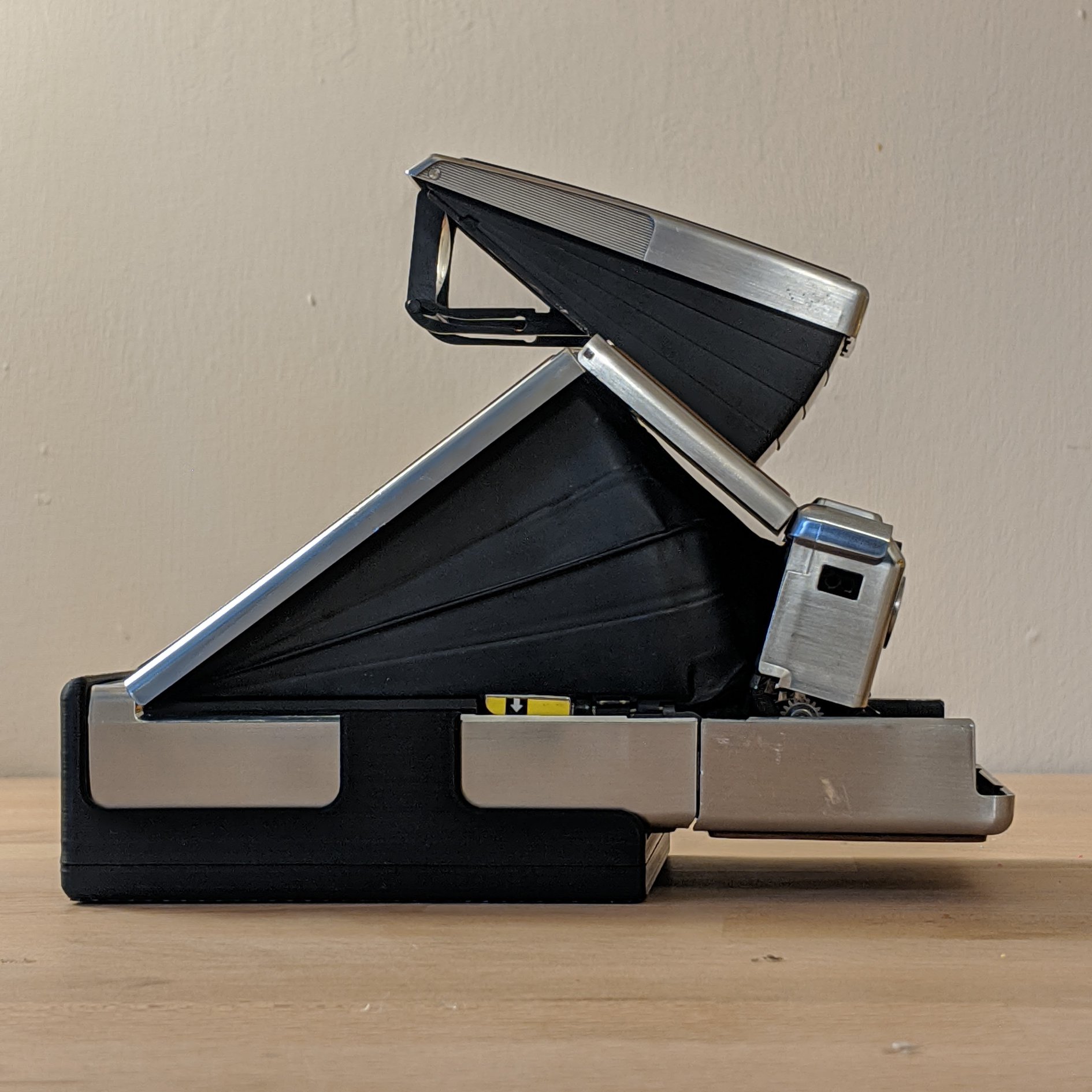 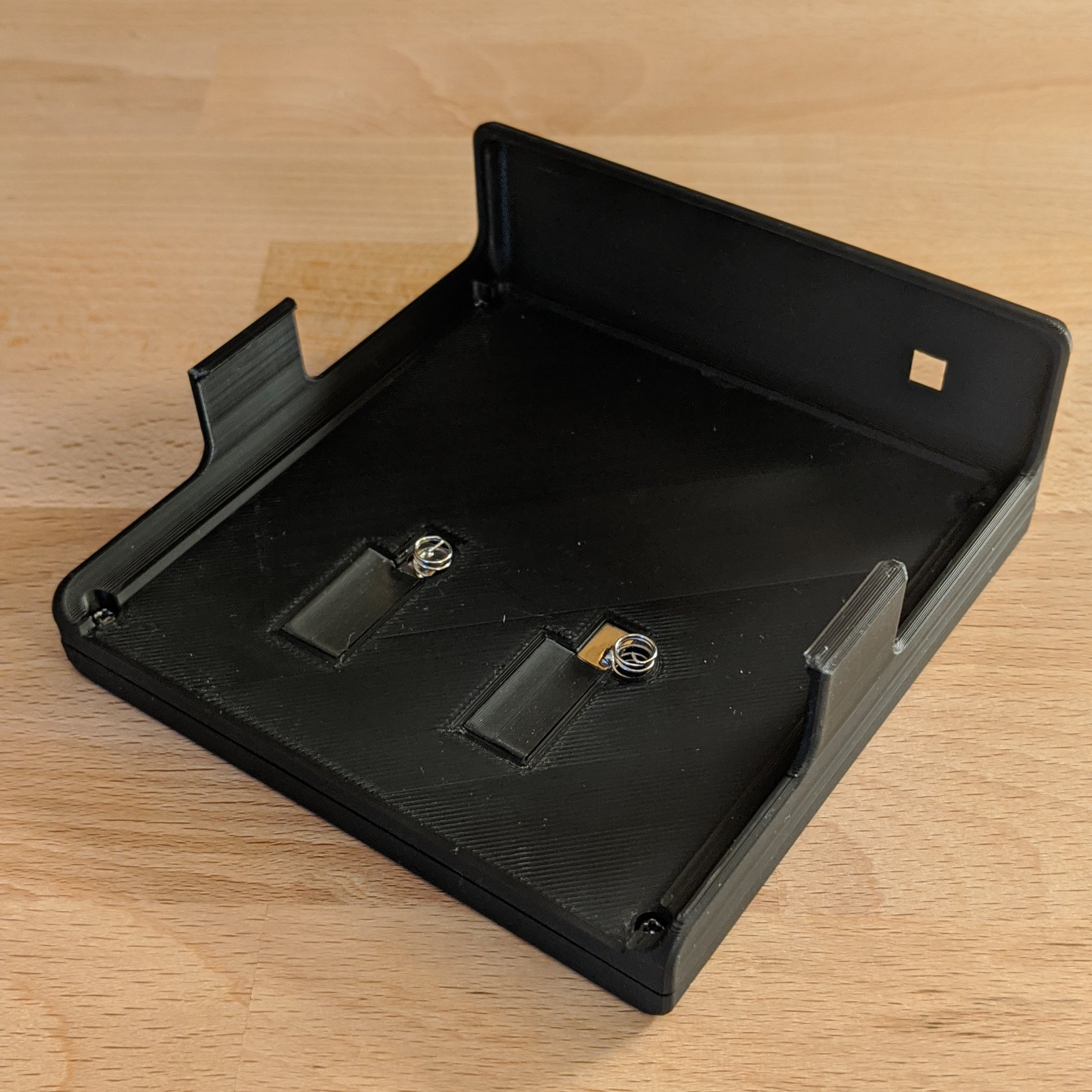 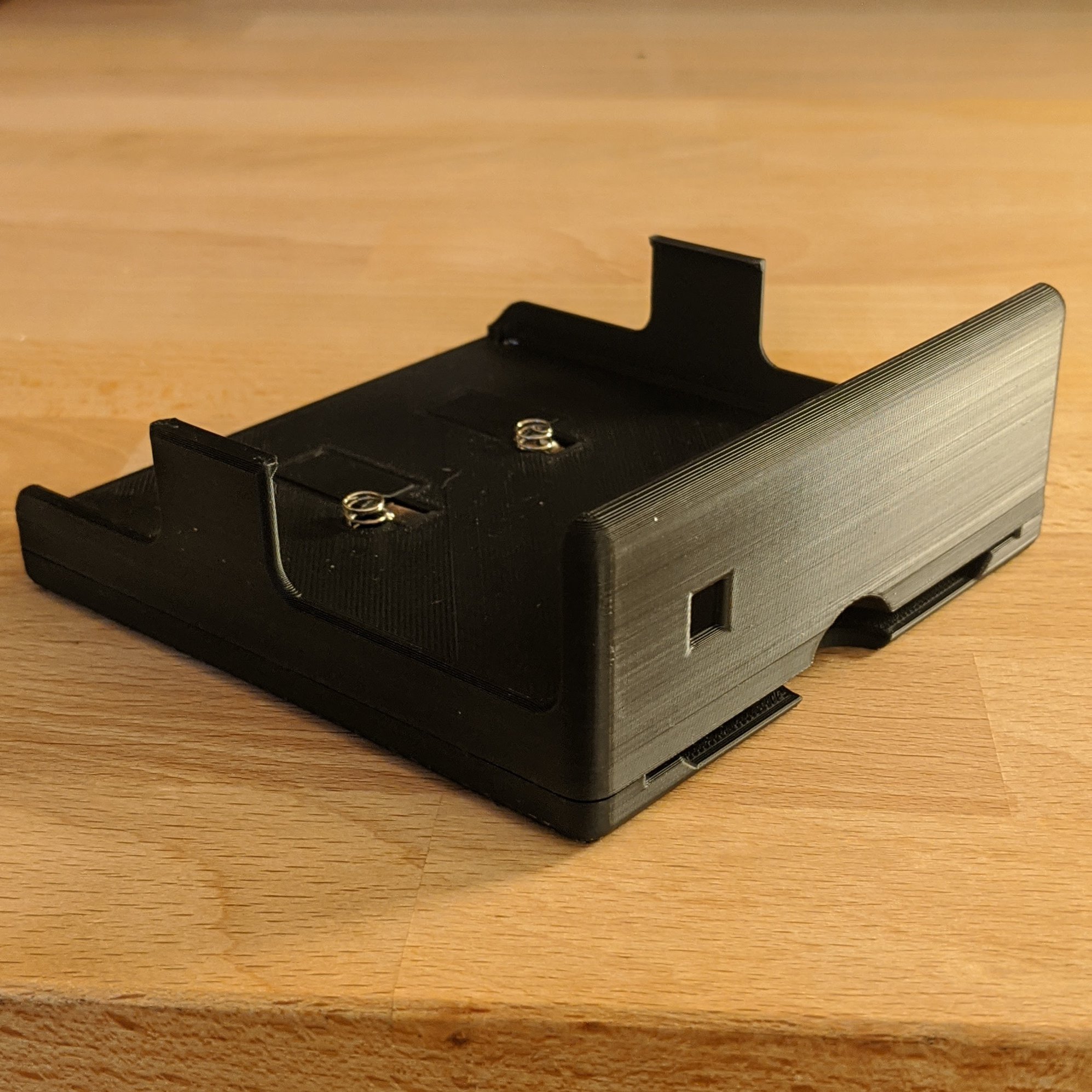 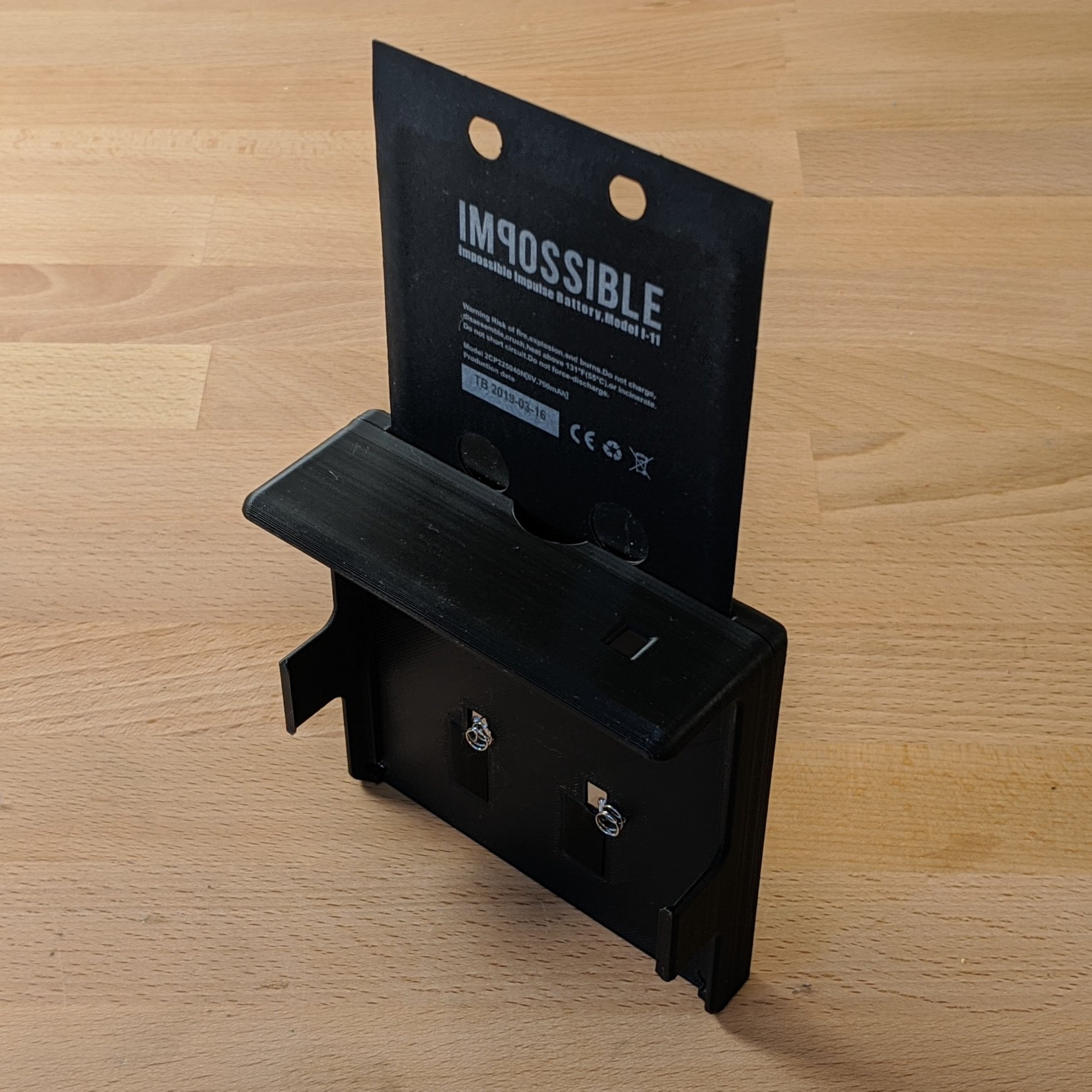 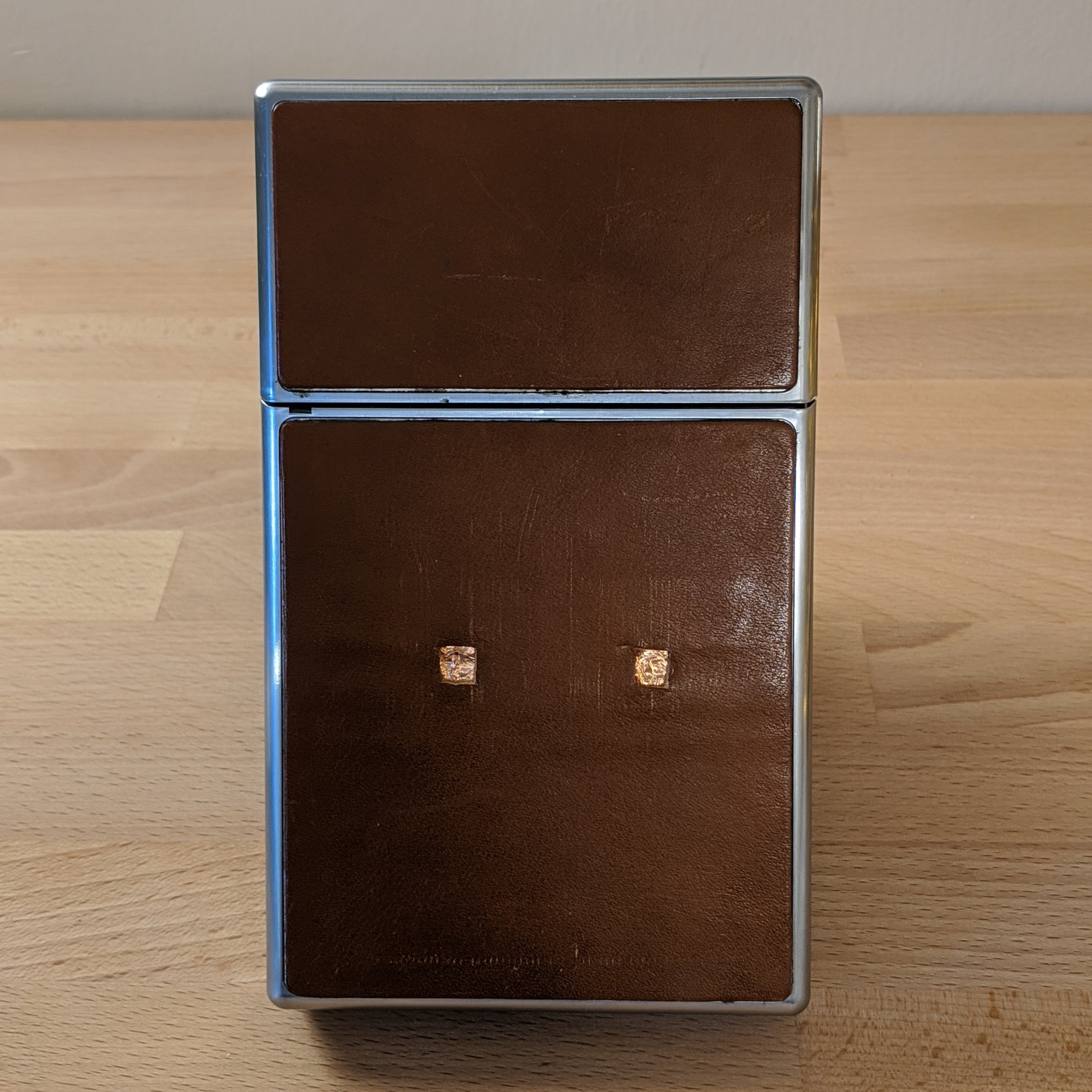 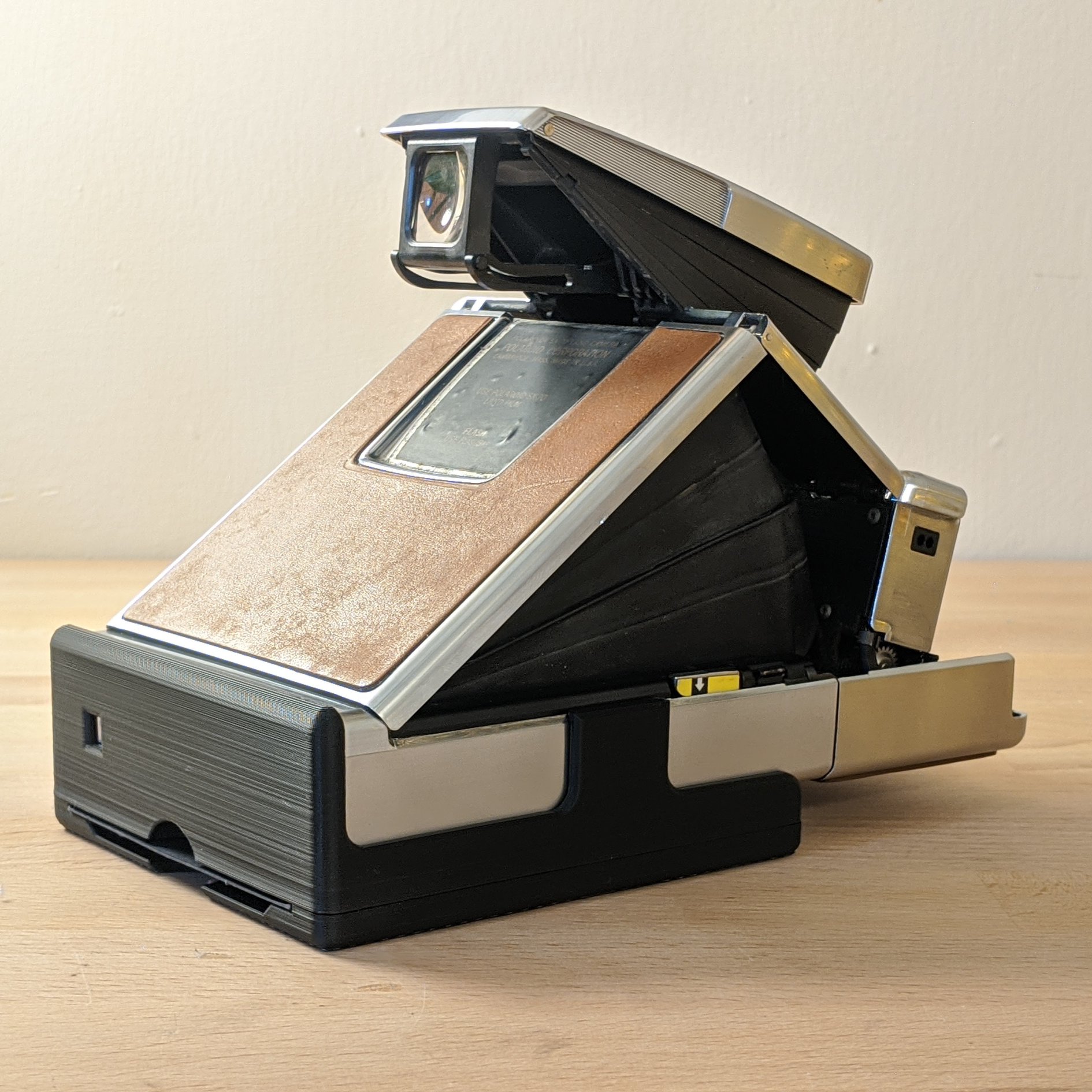 I have seen a similar solution from www.polains.com

Another solution from Thingiverse seems to be a work in progress.

This is another DIY solution by Joaquín Stable, don’t know if he has made the files public. 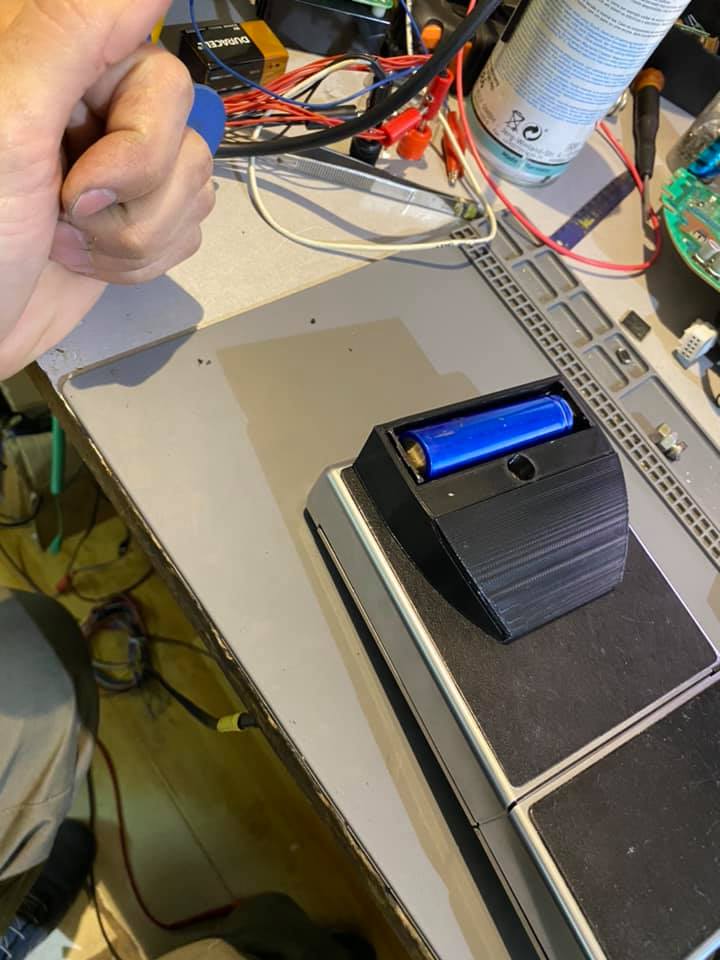 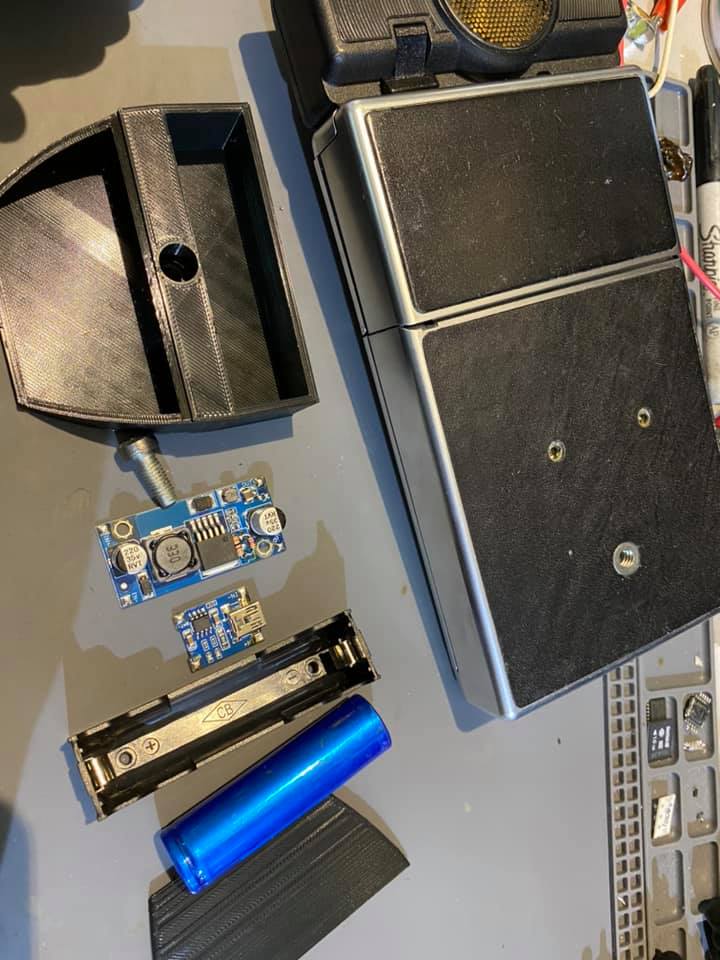 Then there’s the really simple “get the batteries and stick them to the camera” bare bones solutions, because in the end all you need is 4 triple or double A batteries, here by Mato Peto 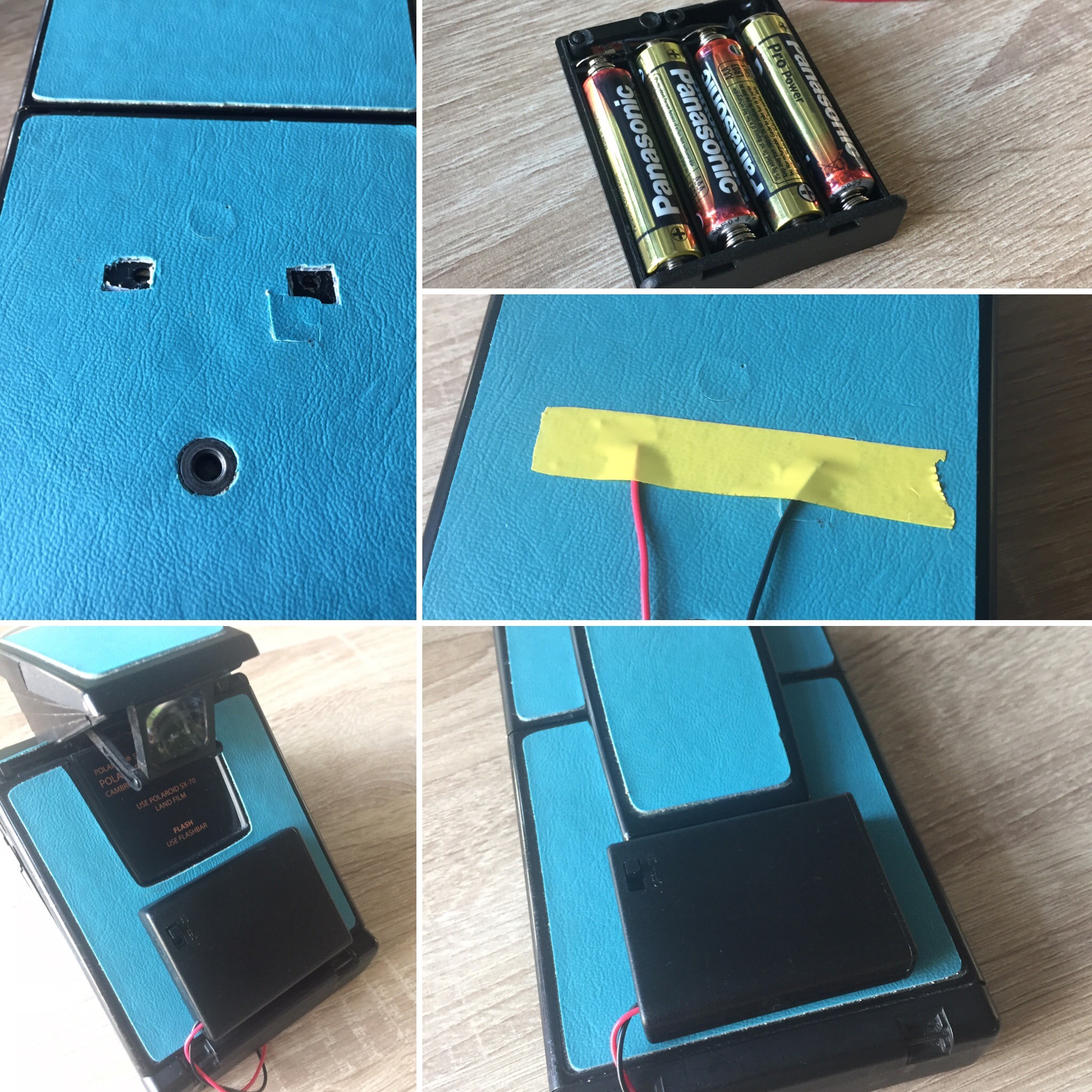 This is by me, the battery pack is really cheap and it’s stuck with double sided tape: 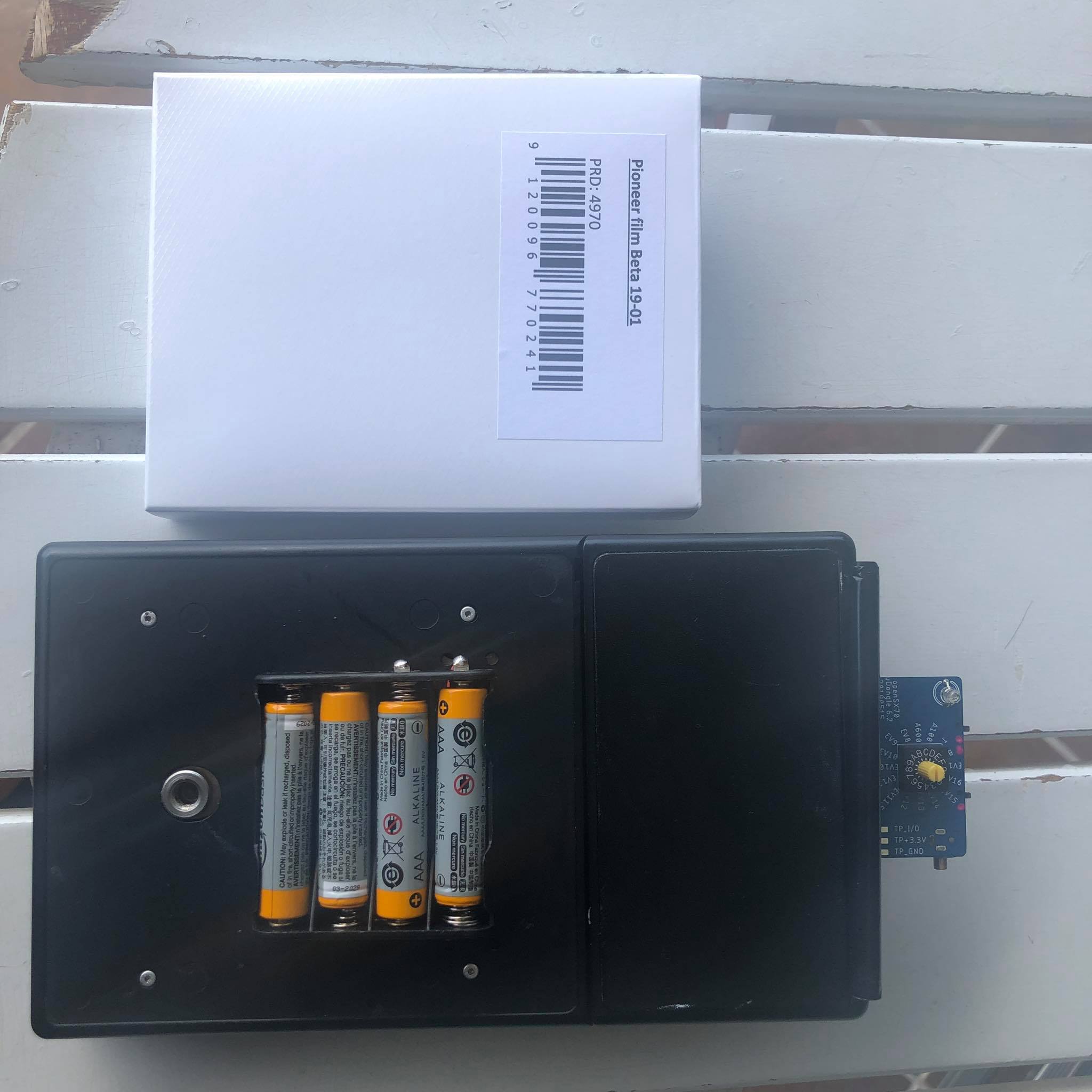 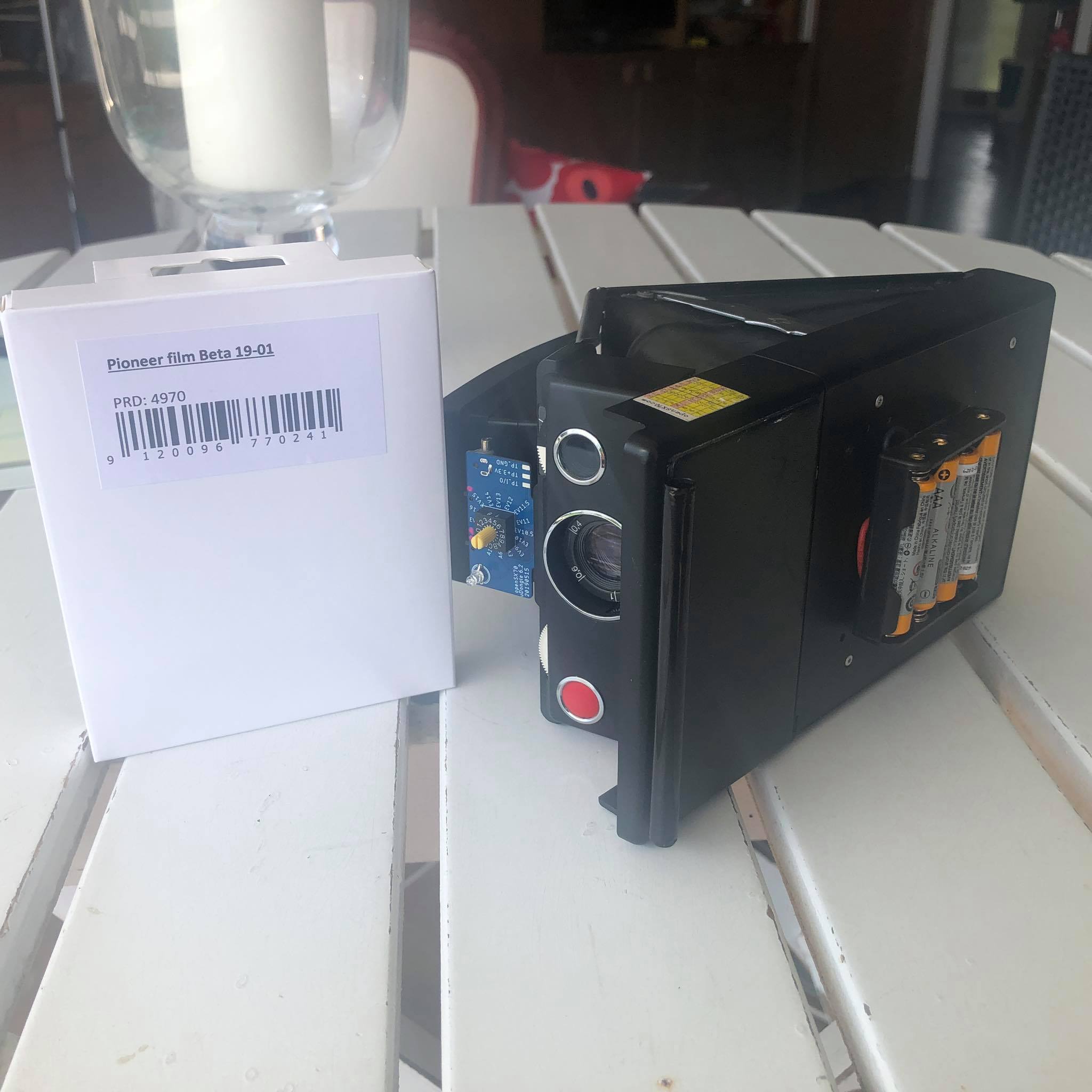 It is my opinion that whatever company comes up with a commercial solution has the change of big success. 2ndShotSX70 tried, unfortunately it is no longer a solution, but it has been a trailblazer. You can still get the 3D printed parts from Shapeways but that is not a ready to use solution and now there are missing parts.

A solution has to use rechargeable batteries, and, it would be nice that it used regular batteries, like AAA. 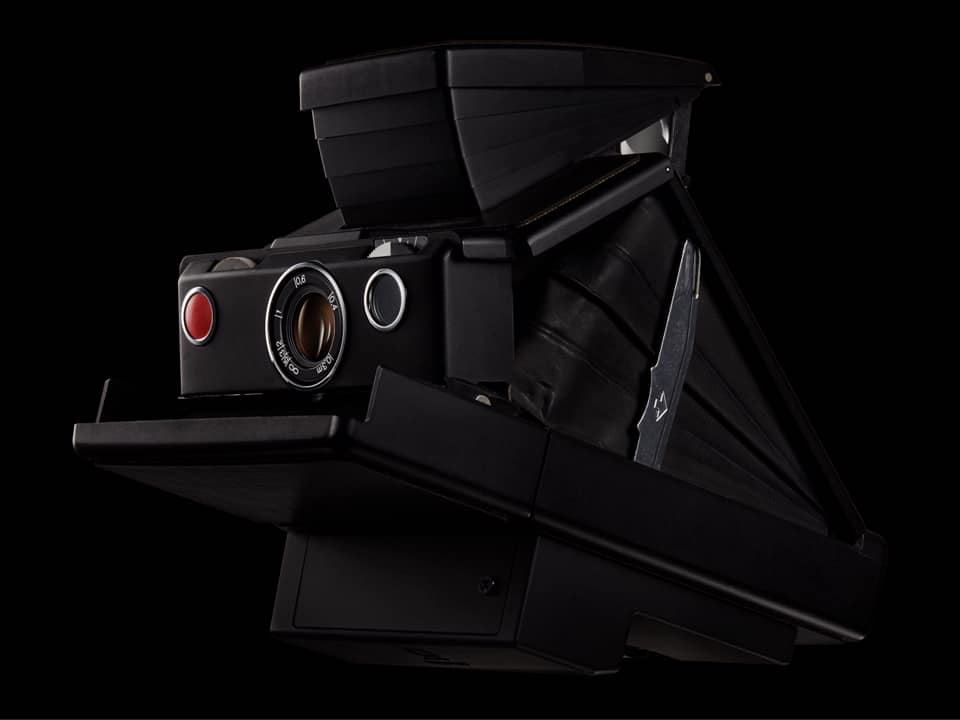 We haven’t seen Rezivot adapter, it uses an uncommond but quite easily available battery. We can only expect the high quality standards that Rezivot has in all its products. We are told pricing will be south of 100USD.

We know of at least another product coming to the market in this category, any original innovative accessory for SX70 is certainly very welcome.

Even thought there are many reasons to use the cheaper film, there are also many cons, the main one being that you basically “break” the camera, its design… or its a lot of work…

But whatever concept, or product wins, and its widely adopted will have a lot to gain.

Personally, that I have many cameras, probably would favor a product that I can simply snap and go. For me having the holes on the bottom to access the contacts is a no brainier and don’t feel that doing that breaks the “magic”

Ideally the perfect battery would be “invisible” but space is tight inside the camera.

But sometimes you just have to look to the old Polaroid to find the solution of current problems. 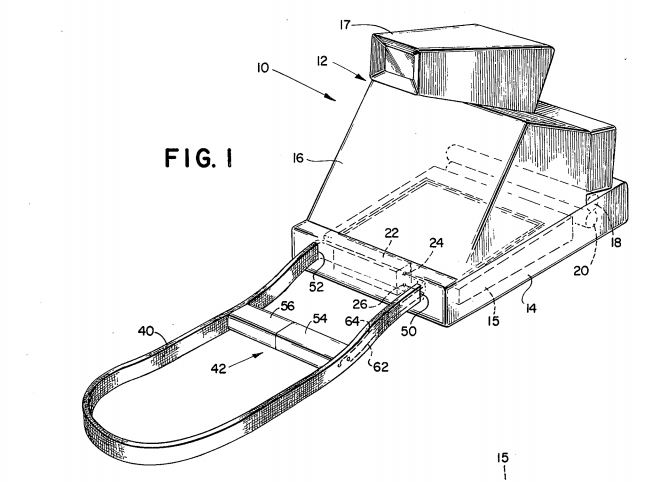 In this Patent Dr. Lands finds a very practical solution, that have yet to see implemented. 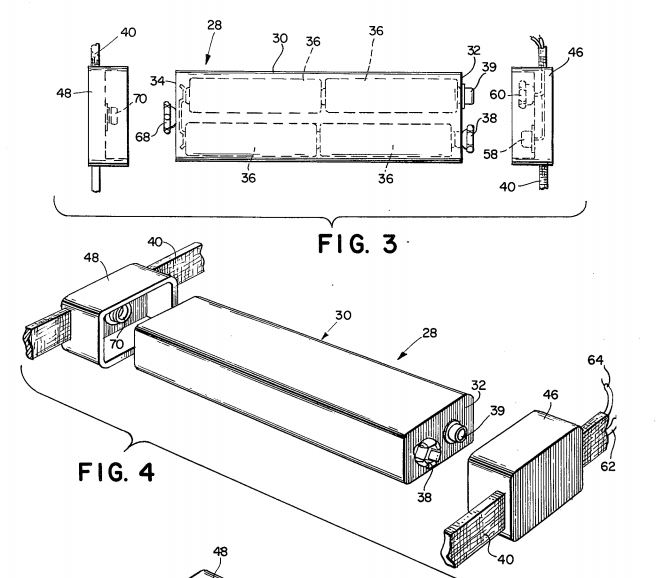 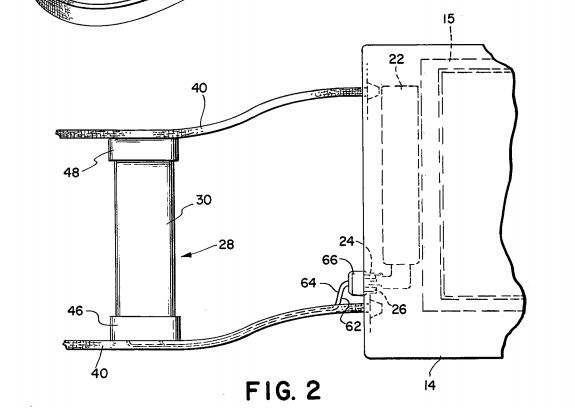 If you have or know of other i-type to SX70 solutions, or have any other info please comment below or send an email to opensx70.com.